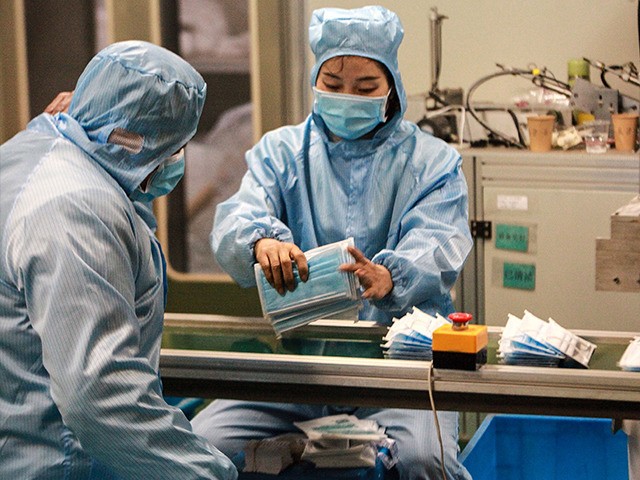 China is prepared to “dominate” medical supply manufacturing “for years to come” at its current trajectory, the New York Times reports.

Supply chains for medical supplies and protective gear have been further rooted in China since the start of the Chinese coronavirus crisis, according to data reported by the Times.

“China has laid the groundwork to dominate the market for protective and medical supplies for years to come,” the Times reports. More market power, not less, is soon to be delivered to China:

Beijing’s coronavirus response has only added to that dominance. It increased mask production nearly 12-fold in February alone. It can now make 150 tons per day of the specialized fabric used for masks, said Bob McIlvaine, who runs a namesake research and consulting firm in Northfield, Ill. That is five times what China could make before the outbreak, and 15 times the output of U.S. companies even after they ramped up production this spring.

The United States’ reliance on imports from China — as well as from Thailand, India, and Malaysia — has been felt directly by American manufacturers who have made their best efforts not to source from China but often have no other choice.

In one case detailed by the Times, QYK Brands CEO Rakesh Tammabattula has shifted his factory’s production from making supplements and moisturizer to now producing hand sanitizer and face masks.

Tammabattula told the Times he could only get the machine that compresses fabric for face masks from China — requiring him to charter a plane from China to his Los Angeles, California, factory in order to get the machine.

Likewise, Tammabattula said he has had to source the plastic bottles he needs to produce hand sanitizer from China as well because there are little to no U.S. companies producing the bottles needed.

“If we were to compare to the Chinese government, there’s just no support for domestic manufacturing,” Tammabattula told the Times, also noting that there is no reason that the U.S. cannot make such supplies, equipment, and goods; “it’s just that we haven’t focused on it.”

For years, Breitbart News has chronicled China’s economic dominance. In the midst of the pandemic, the U.S. has suffered from a shortage of vital drugs, rubber gloves, and plastic bottles due to decades-long free trade policies. The majority of these basic necessities are made in China.

Similarly, about 95 percent of ibuprofen and 70 percent of acetaminophen imported to the U.S. arrive from China.

Such policies, based in economic nationalism, have overwhelming support among Americans. A survey by FTI Consulting, conducted in May, found up to 94 percent of Americans support policies like more tariffs on foreign imports, mandatory country-of-origin labeling, and a requirement that goods be made in the U.S.

Since the North American Free Trade Agreement (NAFTA) was enacted and China entered the World Trade Organization (WTO), five million American manufacturing jobs have been eliminated from the U.S. economy — 3.4 million of which are due to U.S. free trade with China — and 50,000 manufacturing plants have shuttered. The mass elimination of working and middle-class jobs, as a result, has coincided with a more than 600 percent increase in trade deficits.

American manufacturing is vital to the U.S. economy, as every one manufacturing job supports an additional 7.4 American jobs in other industries.

(This article was first published in Breitbart on July 6, 2020.)